After minimal internet exposure, “My attention span grew back, from about 10 seconds to several hours. I could read half a novel at a time, without the itch to look at something new. You know, that twitch of your left hand to open a new tab…“

The novel, the sacred retreat of those who are regaining their abilities to focus on one task. And now thanks to ebooks, yet another way that content providers are going to try and leverage every tiny bit of space to try and sell you something. Over at TechCrunch, Paul Carr mistakenly thought that books are the same thing as ebooks, and also erroneously assumed that publishers would be hiring their own ad teams. Snarkmarketer Tim Carmody rightly points out that somebody could easily devise a software program based on reader demographics to do that for them with a lighter impact on a publisher’s budget than hiring ad teams. But Carmody misses Carr’s real point: his fear is the introduction of product placement, similar to the way products are their own advertisements in movies. That might actually require people to talk to people, namely advertisers talking not only to content providers, but the content creators themselves. As Carr points out:

“Since Ian Fleming defined James Bond by the Rolex on his wrist, many of our most popular literary heroes have been characterised as much by the products they use as by the lines they say. Once those key traits are perpetually being altered at the whim of the highest bidder – a prospect that technology has made very real indeed – well, that’s when the misty-eyed defenders of old media will really have something to write about.” 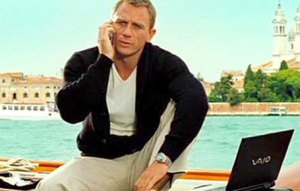 Product placement of any kind turns into the subconscious hyperlink of long-form narrative. At this point in time, most viewers and readers quickly read the semiotic code of the placed product. The Rolex watch is shorthand for luxury, high-cost, and high taste, with a side-dish of showiness and awareness by the wearer of the brand’s ability to impart that image.Product placement doesn’t always bring the fourth wall tumbling down. After all, James Bond inhabits a world that is loosely contemporaneous with ours. Carr might be exaggerating the impacts just a bit, or he might find product placement more intrusive, especially in egregious cases.

What concerns me the most about both ads in ebooks and product placement advertising in print and other forms is the impact it has on our attention. While it can just be a quick semiotic love-note from the author to the reader, it can also be a lovely mental jumping off point that would lead somebody into a little internet-link-clicky jaunt. So much for avoiding the “new tab” syndrome that haunts us. While it could just be inevitable, and the advertisers might win a place in our novels, it would still bug a lot of people. Namely those who still would like a small part of their lives to be free of the interests of commerce, or at least a place where they can derive pleasure from doing one thing at a time.

All of these things swirled around some conversations I heard between library staffers about the relative noise level in the second floor of our library. I’m not a shusher, and in many cases I think talking in the library is welcome. We are there to learn and communicate, sometimes verbally, and occasionally with the technological assistance of a cellphone. All of these things are sounds and voices that can intrude on some people’s consciousness as they diligently search for jobs, watch MJ videos, study for their tests, or read quietly. A quote from a book I was reading the other day seemed to explain how it is that quiet and silence in libraries functions. David Toop in Haunted Weather: Music, Silence, and Memory, quoting Jonathan Katz’s  John Cage’s Queer Silence: “One point of silence, then, is to dissolve the oppositional by freely allowing other voices to be heard.” In other words. If you are quiet, and you listen instead of talking, it gives other the chance to have a voice, and it allows you to hear them. That is what Carr is worried about, and what libraries provide.

2 thoughts on “Ads in ebooks and why silence matters.”