He who binds to himself a joy
Doth the winged life destroy.
He who kisses the joy as it flies,
Lives in eternity’s sunrise.

These from a post about fearing the loss of bookshelves by ereaders by Nathan Schneider, among other things. He calls for us to do more inner work, as technology is merely a way to buttress against the realization that knowledge is precious because it is precarious. His image of joy in a burning library made me think of the humble book-burners of Bradbury’s Fahrenheit 451, who burn books as they read them in order to remember their stories. It also made me think of Sean Wilentz’s apology of Bob Dylan:

Open to artistic inspiration anywhere he found it, Dylan was not so much a sponge…as an alchemist, taking common materials and creating new art. -Sean Wilentz, Bob Dylan in America, p. 335. 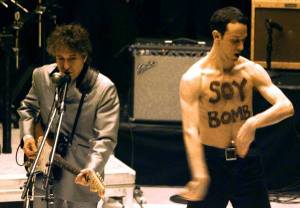 It seems like these to things are interlinked – the creative act of recombination and the ability to let go. I’m coming close to calling Dylan a collageist, but the idea of taking the common stock and making something new resonates with that art form:

But the manner in which collage can make meaning—in an atmosphere now dense in remixes, mash-ups, and shuffles—will be very different than it was in times of crisis past. Today, collage must confront its status as a form that has risen rapidly in postwar popular culture, making it a natural impulse for all media. It is not only a common response to the layers of information that burden us but also an invisible force that reorganizes histories, logs, and lineages to be more readily accessible—now an everyday necessity. –Charlie White, Cut and Paste, ARTforum, March 2009

Dylan is often criticized for failing to acknowledge his sources, but with the rate he pulls from them, it is near impossible and pointless to cite them all. The act of acknowledgment is particular to the academic world, and  the book burners of F-451 seem like they types who are willing to let go of their sources. In their retellings, the stories would be confused, but it opens up the creation of new works a la Dylan, to update them for new times without the hindrance of obvious citation. Blake,  Schneider, and Wilentz all use fire as part of their imagery: destruction as creation, which is at the center of collage–you take the original apart (or out of context) to get something to reuse. Wilentz also refuses the idea of Dylan as a sponge. Blake emphasizes letting go. White points to collage as a force of constant reorganization. These are all central to creation of new knowledge. Libraries as places of creation need to facilitate the obstruction of memory as well as its continued preservation.

This is a call to willfully disorganize our libraries to allow for more interesting access to ideas.  Schneider touts his uncle’s virtual memory shelf over any of the terrible “bookshelves” that ereaders create because the tool itself is so much more personal. While a large library that is open to many voices can never be “personal” it could at least be more of a reflection of the community it serves. To quote Schneider:

So far, for all the wonders they offer, the digital alternatives to a bookshelf fail to serve its basic purposes. The space of memory and thinking must not be an essentially controlled, homogenous one. Amazon’s Kindle and Apple’s iPad are noxious ruses that must be creatively resisted—not simply because they are electronic but because they propose to commandeer our bookshelves. I will defend the spirit of mine tooth and nail.