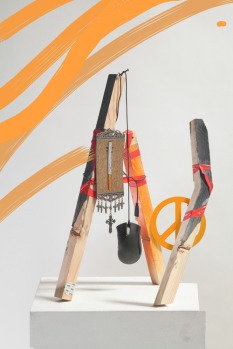 Digital scholarship has a different surface than traditional scholarship, beyond just being communicated across a different medium. That surface is more evenly perforated. It can and should allow more academic voices to permeate its boundary as references. When that happens, our attitude toward those sources becomes more deferential. –Pete Rorabaugh and Jesse Stommel, The Four Noble Virtues of Digital Media Citation

If you are an American, it is likely that you produce nostalgia. Of course, there is the top-down flavor of nostalgia, which runs from television shows to the auctioning off of vintage brand names. The “directors and programmers and gatekeepers” have a solid grip on the production of big nostalgia, with a near-mythical forty-year time delay. While it’s high-profile, it’s not where the action is.

The photography duo Birdhead is known of constantly documenting the banality of their daily lives in Shanghai in the way we all do on Facebook and Instagram, but they do it with older techniques, because they “prefer the tactile appeal of analog film,” and “the current digital cameras look too ugly.” The combination of facebook-esque subject matter and an old-school vibe fit in perfectly with the way we make our own nostalgia. In addition to fitting in with the hipster’s infatuation with things retro, if not straight out old-timey, what we see is the production of nostalgia by each and every person using social media, where every picture, post and link is “a potential document to be consumed by others,” which turns the present into the past, fast.

Birdhead, The Song of Early Spring, 2012

The Brooklyn/Hipster aesthetic does the same thing, but on a much larger scale, especially in food, but also in other goods. The whole thing has become a brand where nostalgia is packaged and sold as fashionable luxury goods. What generation but those born into the digital world could produce such waves of nostalgia for profit and for pleasure? Nostalgia, more so than being a product of honchos in Hollywood, is a deeply social act, performed on a small scale by an entire generation.

Supposedly a bad thing, some researchers are now saying that our constant stream of making the present the past is good for us: it reinforces our connection to others through a common meaning of “the past,” but compared to honest-to-god homesickness (it used to be a disease of which you could die) nostalgia is fairly harmless, if not a great way to make a profit. In a dust-up between designer Jeremy Scott and stylist Ms. Fitz over who could claim the rights to 90’s nostalgia, the point was made that “it can simply belong to whoever most wants to claim it.” The reality is that there’s always plenty to go around because we all make nostalgia. All day, everyday. 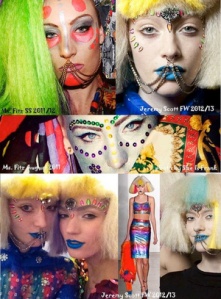 Demarcating the border between sense and nonsense makes interpretive frames reflexive and therefore serves as a catalyst for exploring the very parameters of learning. –Winfred Menninghaus, In Praise of Nonsense: Kant and Bluebeard

…a canon exists and is cherished for representing the solid core of work that centers activity in the field.
Anita Silvers, The Canon in Aesthetics. From “Canon,” In Encyclopedia of Aesthetics, Oxford Art Online. http://www.oxfordartonline.com/subscriber/article/opr/t234/e0100

It’s always trouble when you lead with definitions. In this case, I’ll make the argument with these definitions that much of what students experience in a classroom is canonical in nature. Not a canon in the contested, literary sense, but in any classroom, there are underlying structures of thought in the layout of a curriculum. That’s fine, otherwise the teaching of any class or session would be difficult at best. But one day, as I was killing time in the stacks, I saw a brightly colored stack of journals, and browsed my way to this quote:

Archival items are rarely or never communicated or interpreted….While the canon makes the past present and relevant, the archive preserves the past as past.

When the canon tends to stagnate or become instrumental, mythic or chauvinistic, the archive provides a critical corrective and invites the rediscovery of alternative sources.

Working backwards, I realized this encapsulated the potential the library has to upend canons, and more importantly, the way it opens up the possibility to challenge the great pyramid of bloom’s taxonomy. If we are going to take informed learning or critical literacy seriously, then the dated, hierarchical divide between acts of understanding and creation of knowledge shouldn’t be as  drastic. Nor should one be prized above the other if the skills we want to teach are going to relevant in the much-hyped (over?) “2.0/3.0” information ecosystem. Libraries are the places where students can create knowledge that can compliment or challenge what they learn in the classroom, so if the archives are going to have that kind of relationship to the canon, then creating needs to come into play much earlier in Bloom’s taxonomy than at the top.